A number of treatments for androgenic alopecia are available. Certain oral drugs (e.g., finasteride) block the enzyme 5-alpha-reductase, thereby preventing the synthesis of DHT. These drugs are quite effective in stopping hair loss, but in most men they have little effect on hair re-growth. They also have severe side effects such as impotence and fatigue. A topical agent, RU58441, blocks DHT from binding to androgen receptors in the scalp but users seems to share the same side effects. This drug is also quite effective in stopping hair loss, but its ability to stimulate hair re-growth is limited. The only widely-used treatment known to stimulate hair re-growth is minoxidil. Minoxidil is a topical agent that improves circulation to the hair follicles, and it can stimulate some hair growth in some individuals if combined with an agent that stops hair loss. However, minoxidil can cause significant skin irritation, and it is absorbed systemically, where it can adversely affect the function of the heart.

L-ascorbic acid 2-phosphate (ASC2P) is a stabilized form of vitamin C that has been found to be effective in not only blocking hair loss, but in also stimulating re-growth of hair. Unlike regular vitamin C, ASC2P remains stable when dissolved in water or exposed to air due to the protective effect of the phosphate group. Regular vitamin C (ascorbic acid) lacks this phosphate group and is therefore quickly oxidized when dissolved in water or exposed to air. Due to this instability, it is very difficult to obtain a therapeutic effect of any kind from applying ascorbic acid directly to the skin. The stabilized ASC2P compound is a very small molecule (only 278 Da) that is able to readily penetrate through the skin. Once inside a cell, ASC2P is converted into active ascorbic acid.

DKK-1 as a target for an hairloss cure

When DHT binds to androgen receptors in hair follicles, one of the main downstream effects involved in the balding process is the induction of expression of a protein called dickkopf-1 (DKK-1). Expression levels of DKK-1 are dramatically increased in the dermal papilla in response to DHT, particularly in individuals affected by androgenic alopecia. DKK-1 inhibits the growth of the dermal papilla and can even induce apoptosis. Clinical studies have shown that blocking the activity of DKK-1 with antibodies blocks these effects in cultured hair follicles (1). Addition of ASC2P to cultured hair follicles totally blocks the DHT-induced expression of DKK-1, suggesting that ASC2P may be able to stop the hair loss process (2). Scientists investigating the mechanisms whereby ASC2P induces hair growth obtained some dermal papilla from volunteers affected by androgenic alopecia and grew them in culture. When they treated the dermal papilla with ASC2P, they noted that expression levels of a protein called versican increased (3). Versican is well-known to play a prominent role in inducing anagen (the phase of active hair growth) and in maintaining hair growth. Versican is a large extracellular matrix proteoglycan involved in regulating cellular adhesion. Its expression level is known to be up-regulated by beta-catenin (4). Accordingly, the scientists examined the impact of ASC2P on beta-catenin. They found that ASC2P treatment induced beta-catenin to accumulate in the nuclei of the treated dermal papilla. 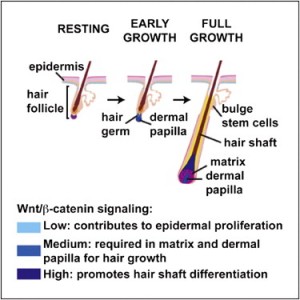 ASC2P therefore seems to act directly on the hair follicle’s “master switch,” telling the dermal papilla it is time to grow.

In addition to stopping the hair loss process, ASC2P seems to be capable of stimulating hair re-growth. When added to in vitro hair follicle cultures, after only 9 days the length of new hair-shaft growth was significantly longer than in control cultures (7). This effect seems to be mediated through the induction of insulin growth-factor 1 (IGF-I). A study on cultured hair follicles found that ASC2P caused a significant increase in IGF-I expression, and that blocking IGF-I with antibodies was able to block the hair shaft elongation induced by ASC2P (8).

In addition to directly stimulating hair growth via IGF-I, ASC2P seems to also both stimulate the growth of dermal papilla cells and to trigger hair follicles to move out of telogen into anagen (9). Telogen is the resting phase during which hair follicles shed their old hairs in preparation for producing a new hair during anagen, the active hair-growth phase. In hair follicles affected by androgenic alopecia, DHT prolongs telogen. In mouse models of androgenic alopecia, application of ASC2P to the skin shortened the amount of time the hair follicles spent in telogen, triggering them to resume active hair growth earlier.

Therefore, ASC2P seems to be able to both stop the hair loss process by blocking the DHT-induced expression of DKK-1 and to induce significant amounts of new hair growth through a distinctly different mechanism of action. These findings suggest that topical application of ASC2P could be used as a stand-alone treatment for hair loss, or it could be used to complement other treatments for hair loss. An advantage of using it as a stand-alone hair loss treatment is that it would allow the user to avoid the significant side effects of other hair-loss treatments. As a natural form of vitamin C, ASC2P has no side effects. It is not even capable of causing skin irritation.

Applying a solution of only 5% ASC2P to the scalp allows a bioactive amount of ASC2P to enter the dermal papilla at the base of the hair follicles. Unlike solutions of ascorbic acid, solutions of ASC2P are not acidic and do not sting upon application.