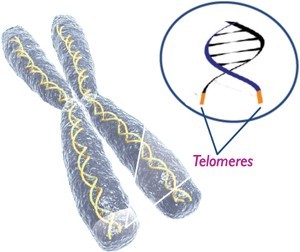 The ends of chromosomes are protected by special structures called telomeres. Due to the technical details of how DNA is replicated, every time a cell divides it cannot completely replicate the end of the telomeres, and therefore, with each cellular division, the telomeres progressively shorten. After a certain number of cell divisions (“the Hayflick limit”), the telomeres become too short to protect the chromosomes, and the cells will all either undergo senescence, malignant transformation or apoptosis (programmed cell death).

Telomere shortening seems to be intrinsically linked to aging, as cellular populations reach their “Hayflick limit” and become unable to repair and restore tissues. Older humans have shorter telomeres than younger humans, and the length of an individual’s telomeres can be used to predict the time of death due to diseases associated with aging, such as cancer, heart disease, and dementia. However, there isn’t a direct correlation between a person’s actual age and the length of their telomeres. Lifestyle factors such as stress, diet, and exercise seem to be able to modulate the length of telomeres.

The body does have a mechanism in place to repair and restore the telomeres. Activation of a special enzyme called telomerase allows cells to rebuild and lengthen their telomeres, allowing cells to exceed the Hayflick limit without consequences. Individuals who are able to activate repair of telomeres through lifestyle changes may be able to extend the replicative ability of their cells, and therefore extend their own lifespan, or at least avoid diseases associated with aging.

The special stabilized form of vitamin C called ascorbic acid-2 phosphate (Asc2P) has been shown to be able to slow down telomere degradation and extend the lifespan of cells. When added to cultures of endothelial cells, Asc2P is able to extend the lifespan of the cell culture two to three times the normal lifespan (1). These effects are mediated through slowing the degradation of the telomeres, therefore allowing the cells to exceed the Hayflick limit, and by reducing oxidative damage to the rest of the cell via the powerful antioxidant activity of Asc2P. In these studies, Asc2P was able to slow the shortening of telomeres by 50 to 60%.

Regular vitamin C does not appear to have any effect on cellular lifespan or telomere length. This may be in part due to regular vitamin C’s poor bioavailability. When added to cell cultures, very little active vitamin C is able to penetrate into the interior of cells. Direct comparison studies have shown that Asc2P easily penetrates into cells and increases the intracellular concentration of active forms of vitamin C to almost four-fold higher levels than are observed with regular vitamin C (2).

The mechanism whereby Asc2P slows telomere shortening is unclear. It does not appear to directly or indirectly stimulate the production of more telomerase. Currently, it is thought that its ability to reduce oxidative damage and stress inside the cell is somehow protecting the telomeres from shortening (3). Damage from free radicals may be associated with degradation and early shortening of the telomeres. Stress and lifestyle factors that increase intracellular oxidative stress have been observed to result in premature shortening of telomeres. Asc2P may be able to prevent and reverse these effects, thereby potentially prolonging lifespan